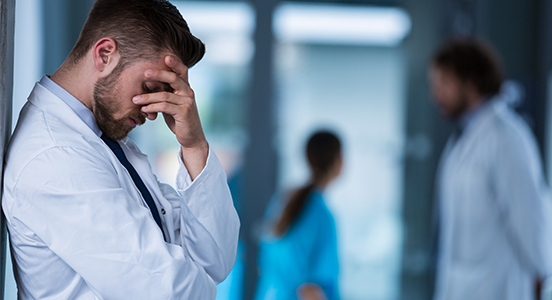 The realities of working within a medical profession are often misunderstood. Most people’s knowledge of the medical field commonly comes from TV shows since its more accessible to them. Rather than building characters through introspection and a journey towards mental stability, these shows like to magnify medical drama and focus almost exclusively on external conflict. Hospitals are portrayed as hotbeds of both drastic medical procedures and intense social conflict with little to no time for self-care. These shows often fail to acknowledge that these external stressors have heavy tolls on the mental health of doctors and the aspiring doctors that encounter them.

Medical professionals are given responsibilities that are far greater than the average person. They meet with hundreds of patients and are constantly under pressure to give the best medical attention possible to each one. All these demands often engender anxiety, depression, and a variety of other mental health problems. The American Foundation for Suicide Prevention has even found that “suicide rate among male physicians is 1.41 times higher than the general male population. And among female physicians, the relative risk is even more pronounced — 2.27 times greater than the general female population” (AFSP). The accumulation of long work hours, sleep deprivation, and the emotional difficulty of losing patients they’ve overseen has led many physicians into depression, addiction, and suicide.

But doctors are devoted, caring, brilliant problem solvers. They have extensive knowledge of the health hazards associated with poor mental health and help others understand that there are resources for them. They must have referred patients to these sorts of services in the past, so why don’t they use them for themselves? Many point out workload as a factor in the lack of sufficient self care. In fact the 60-80 hours of work a week that most residents go through, make it extremely hard for them to simply find time for their own mental health. Although this is a legitimate reason, more often than not, the largest obstacle for those with mental health problems in the medical field is the stigma and perceived consequences behind having them.

Mental health problems should not be ignored, regardless of reason.  Even so, there seems to be a trend with medical professionals to “hide” or neglect mental health. Nathaniel Morris, a Harvard Medical School alum and current physician in the Stanford University school of Medicine points out, “more than 60 percent of surgeons who had experienced suicidal thoughts were reluctant to get help because of licensing concerns… 20 percent of physicians with moderate to severe depression would not seek care out of fear of losing their medical licenses.” This fear of losing their ability to practice what they love, as well as losing credibility to their character, propels physicians to fall deeper into problems. Practicing medicine isn’t the first time that physicians find themselves in this position; this culture of fear and the struggle with mental health often begins before medical school.

When imagining a group of aspiring doctors, the images that come into mind are intelligent, dedicated, hard workers who strive to be the absolute best they can be. Of course, there’s nothing intrinsically wrong with these characteristics. However, when subcultures are created that pit people with similar attributes into competition, obstacles arise. Pre-med students fall into a similar traps as full-blown physicians do. The ideas that there are only so many people that get accepted into medical school, that there are only so many that will attain the highest grades, and that only so many can succeed begin to control their lives. Pre-med student’s grades become the patients they tend to with all their effort, their studies are the 60+ hour work weeks. On top of all this, they are often expected to live with a social life, volunteer, do research, and prepare themselves for a career that is easily prone to failure without careful attention. Their greatest fear and question lies here: am I cut out to be a doctor? Unsure of themselves, they look at their grades, those of others, and the “requirements” set by their own expectations of Medical Schools for an answer, repeatedly sizing themselves up against these perceived standards.

Ironically, the path to the profession meant for those who would dedicate themselves to the health of others becomes one filled inevitably filled with mental health hazards off their own. As expressed in cross-sectional research by Daniel Z. Fang, pre-med students become easily susceptible to depression since, “intrinsic pressures of self-motivation, perfectionism, hard work, and determination, the very things we admire physicians for, may be the same traits, which, when combined with extrinsic pressures, become a hindrance to a person’s well being.”  The few studies done specifically around pre-med mental health only confirm that there is an overarching problem.

Even with the growing awareness of the importance of mental health, knowledge of issues within the premed community seem to stay within these bubbles. While colleges have made their own individual efforts for their students, the overall availability of services directed towards pre-med students can be improved. To be most effective, a systemic change has to occur within the community, not just on an individual level. A new understanding of the role of mental health in the aspiring physician must appear. It will maintain that pursuing help is not an admittance of failure, instead it reflects maturity necessary of the profession they’re working for.